“I don’t get no respect”

Wow, this may be the first time I have actually disagreed with a dictionary. I’ve had a couple of situations in the last couple of months that have had me chewing on some thoughts about respect. What is it? What does it mean to respect someone or something? Is there a lack of respect in today’s culture? Why? What is the starting point for respect?

Let me start with  a definition that I found (online of course). Respect is “A feeling of deep admiration for someone or something elicited 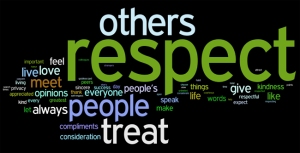 by their abilities, qualities, or achievements.” Really?! As I was rumbling around the web looking at other people’s thoughts about respect and then tweeting some great quotes, I found myself stumbling across this saying a number of times “Respect is something that is earned, not something given”.

I guess I would have to disagree with both the definition and the quote. It seems to me that respect is a starting point and not something that has  to be earned or is deserved by someone because of their accomplishments.  Stating that respect is something that is “earned” or “deserved” would naturally infer that some people or things are undeserving of respect. This would seem to come from the prospective that only those things / people that we “value” are then worthy of our respect and if we don’t value something or someone then we do not owe them respect.

So, maybe respect is something that comes out of our value system. I guess that I would argue that everyone is of value (created in the image of God) and therefore is deserving of respect. Others, I suppose, have a different value system and do not see value in all people and do not deserve respect. BIG PROBLEM. Many of our relational difficulties occur because they don’t start from a place of respect.

Why this post? In a number of situations recently, individuals and companies, I’ve observed, have shown a lack of respect (and in turn value) to customers and others. It has been extremely disappointing to me. It seems to happen especially frequently in the political arena, not only among politicians, but also normal citizens to the leaders of our country. I think that if we could all work from a place of mutual respect (given not always earned), we can certainly move forward with less agitation.

So, too, in the business world. Respect for our customers comes not only from who we are and what we believe, but also from the value that we place on each and everyone that visits our website, posts on our Facebook page, subscribes to our tweets, views our YouTube videos, emails comments and even CALLS US ON THE PHONE. I hope that the respect that we have comes through in each and every contact that you have with us.

Please, give us some feedback. We “value and respect” your comments. Post them here or at http://www.mcdonaldcontainers.com.